The fifth generation (5G) of mobile communication promises a 1000x higher mobile data volume per unit area and support for 10–100x more connected devices than 4G mobile networks satisfying the interconnection of the Fog infrastructure components including thousands of IoT devices and hundreds of Fog nodes, and the pressing connectivity requirements of the network throughput and latency of IoT-enabled deployments. The increased performance of 5G networks is achieved by introducing new physical layer communication protocols techniques like massive MIMO, beamforming, mmWaves, and so on. Thus, 5G networks have the potential to be promoted as the building blocks for reducing the cost and complexity of managing large-scale IoT applications while they also can be seen as ubiquitous network fabrics for the Edge, Fog, and Cloud nodes. However, the proximity to the nearest radio unit, the wireless protocol, and physical obstructions can all have an impact on how connected a mobile node (such as a vehicle) is as it travels about a space. Mobile nodes are also not evenly distributed around the edge networks, migrating from one Fog node’s coverage to another, which hurts overall performance. In the end, service owners have two options: either spend a significant amount on high-coverage 5G networks with several Fog nodes and dense access points or carefully plan their own 5G network infrastructures to be able to handle the extremely variable mobile workload. IoT application owners have a very tough time putting up testbeds to assess the functioning of their applications and network KPIs since the 5G networking concept is still in its infancy.

In our previous post [2], we introduced Fogify, a Fog Computing Emulation framework that is capable of scalable and repeatable experiments on the Fog Continuum. While Fogify can create realistic emulation experiment testbeds, it makes one key assumption; it considers that the emulated infrastructure is fixed in position. To overcome this limitation, we create a Fogify plugin denoted as 5G-Slicer [1]. This plugin enables fog infrastructure with computing and analytic capabilities to present mobility and 5G networking concepts. Therefore, with 5G-Slicer, the relevant modeling abstractions are provided for mobile entities, trajectory updating, and mobile connectivity. In turn, when mobility is involved in computations, the network connectivity varies, and 5G-Slicer enhances the Fogify network overlay so as to update signal strength based on various distance-based models and 5G connectivity protocols, including massive MIMO (Multiple-Input Multiple-Output) and antenna beamforming. In a nutshell, 5G-Slicer facilitates the emulation of 5G-enabled Network Slicing in the presence of large-scale and mobile 5G-enabled IoT applications by providing: (i) modeling abstractions for network infrastructures, such as radio units, MECs, mobile nodes, user equipment, and node trajectories; and primitives for describing user-plane VNFs, such as software firewalls, policy enforcement enablers, and packet inspection. (ii) an emulation execution framework that takes as input the slice model and generates an experiment testbed, while offering extensible interfaces for dynamically altering at runtime network QoS based on mobile node positioning. Specifically, Users simply describe the experimentation scenario, leaving to 5G-Slicer its transformation into an emulated testbed updating in real time the radio network characteristics (i.e., signal strength) and respective network QoS, according to the mobility patterns of end-nodes. 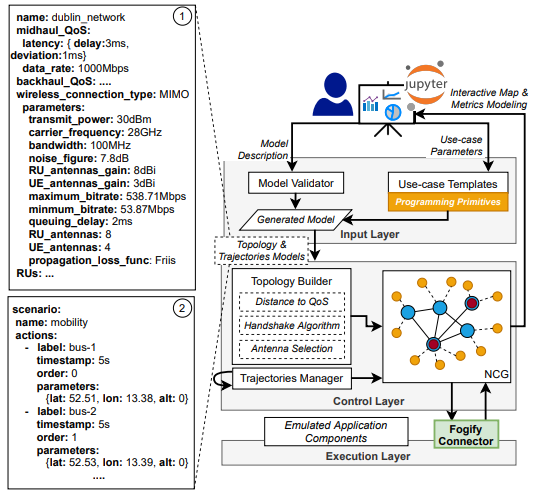 We presented the 5G-Slicer research paper and a demo at the ACM/IEEE International Conference on Internet of Things Design and Implementation (IoTDI2022). Both system and demo code are publicly available [3][4]. Moreover, a presentation of the emulation framework Fogify and 5G-Slicer can be found [5].