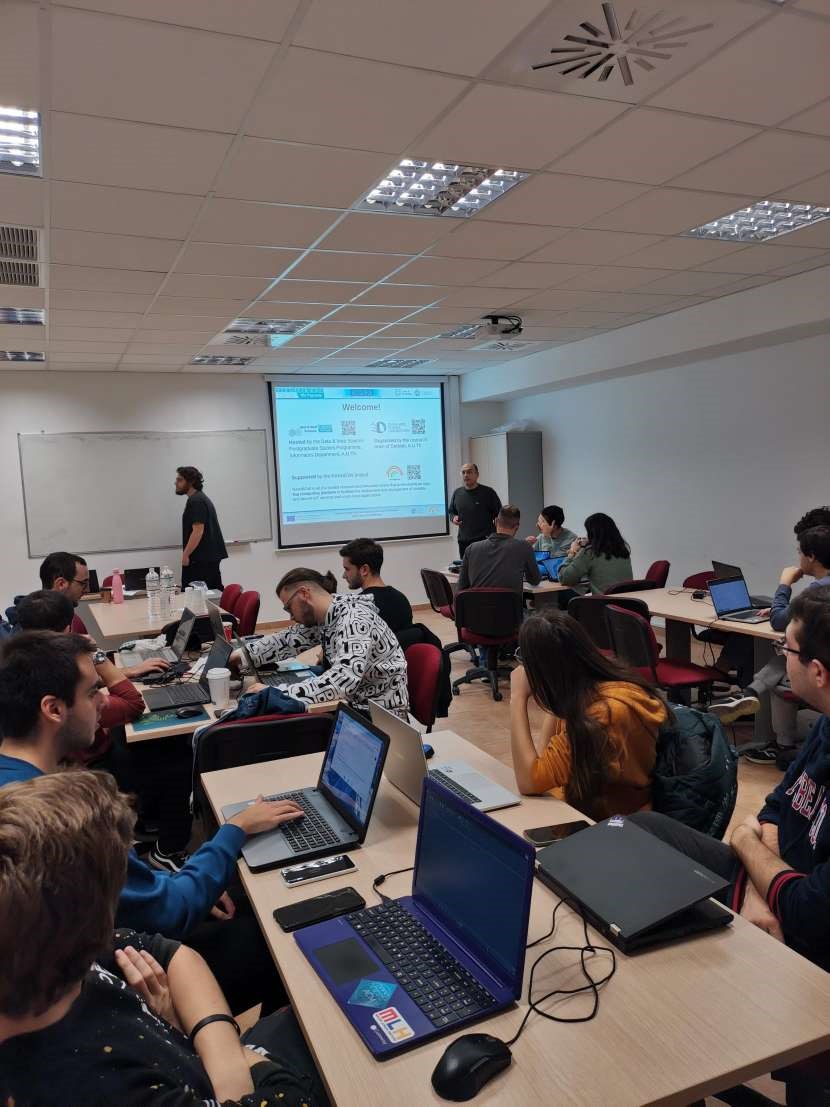 On 3rd of December, 2022 the Data & Web Science Laboratory of Aristotle University of Thessaloniki (AUTH), with the support of RAINBOW and within the framework of its Data & Web Science postgraduate studies programme, organized a hackathon activity titled “Building optimized IoT applications for distributed environments”. The activity was addressed to undergraduate and master students as well as PhD candidates of the Department of Informatics, Aristotle University of Thessaloniki. 16 participants formed 5 groups of 2-4 members which worked together as a team.

At the beginning of the activity, the students were introduced to IoT technologies, their respective applications and to RAINBOW’s Fog Computing platform that provides a solution beyond the-state-of-the-art for the deployment and management of cross-cloud applications. Then, they were provided with a hands-on tutorial for the Docker ecosystem and a demonstration how containerized applications are implemented. Following that, in the first part of the hackathon, the participants utilized an IoT application scenario concerning the management of energy consumption data in a distributed environment such as a fog network. The teams then coded their application in the language of their choice (with Python being the popular choice) to implement their business logic for the fog node and the cloud service parts. In the next step the participants build the respective docker images and deployed them in specially-prepared virtual machines that fulfilled the roles of fog nodes and the cloud. The fog nodes provided to the participants were running the RAINBOW data management stack with the data monitoring and storage services in place. The requested outputs included some basic data analytics and the detection of possible outliers among the captured measurements.

While building, deploying and testing their solution the competing teams had to plan their approach so as to satisfy the main challenge which dictated the exploitation of the fog resources in an optimum way in order to minimize the data exchange with the cloud services. In the final phase each team presented and demonstrated live their solution. The winner was announced based on the results of the demonstration and the quality of the developed solution. All participants received a Raspberry Pi Pico W, a popular low-cost platform for IoT projects, while the best solution won a full Raspberry Pi 400 kit.

The participants in an anonymous feedback session commented very positively on the user experience and usefulness of the RAINBOW platform for managing and deploying IoT applications based on this first-contact experience with it from a developer perspective. There were difficulties experienced mainly caused by the limited available time for completing several tasks of the development process, as well as some initial IPv6 connectivity issues over the WiFi network that were later addressed through the use of VPN.

During the activity experienced researchers Theodoros Toliopoulos, George Vlahavas, Anna-Valentini Michailidou and Vasileios Psomiadis from the Data & Web Science Laboratory (Datalab) supported all of the participants. By the motivation provided by the activity challenge as well as the capabilities offered by the RAINBOW platform, the teams were encouraged into developing their own unique solutions by tackling any technical barriers after they have understood the scope and the potential of the offered tools and technologies. Students benefitted by being introduced to the complete pipeline of the development and deployment of modern IoT applications while getting themselves familiarized with the use of docker technology and with RAINBOW’s advanced data management stack for handling data processing in distributed topologies with limited resources, such as Fog networks.