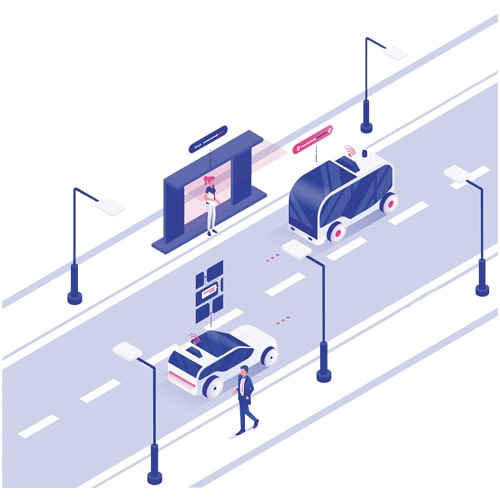 The Digital Transformation of Urban Mobility Use Case aims to demonstrate how RAINBOW system will contribute on developing a real-time geo-referenced notification system for vehicles traveling in urban areas about Hazardous situation. The RAINBOW platform will also act also in the vehicle communication field, by providing a reliable and decentralized approach to safely handle exchange of messages.

The use case hinges upon a real-time geo-referenced notification system for vehicles traveling in urban areas about Hazardous situations for the city mobility network, due to any possible cause. The notification system will be designed to collect signals issued by entities in urban.

Explicit notifications refer to those that are either triggered directly by vulnerable users, who may want to report a hazardous situation. Automatic notifications may be triggered by on-board sensors, by Road Side Units or as a result of sensor fusion processes that may involve cars and Road Side Units sending logs to fog, MEC (Multi-access Edge Computing) and cloud, where AI/ML algorithms can infer alert conditions that should be reported.

The notification system is designed to collect signals issued by entities in urban areas (Vehicles, Road Side Units, and Vulnerable Users). There are two types of notifications:

As starting point configuration, the demonstrator consists of a road-equipped segment with an on-site installation of a Road Side Unit (RSU), as reported in Figure 1. The infrastructure is equipped with multiple IP cameras directly connected with the RSU. The video stream is also reachable by the MEC node, which communicates with the RSU through the Internet. The AHED service consists of a series of computer vision techniques and AI algorithms able to identify the presence of animals on the road, which can represent a dangerous situation for drivers. Based on this, the AHED service can run either on the RSU, or on the MEC node, where each configuration implies advantages and drawbacks with respect to the latency and accuracy constraints. Indeed, the RSU benefits of the direct connection with IP cameras, which yields a high-resolution video stream at high frame rate.

Unfortunately, due to the channel latency and the available bandwidth, the node works typically with a low-quality video stream with smaller frame rate, thus resulting in less accurate results. Besides, the quality may change due to variable network conditions. Moreover, once the hazardous event has been detected, the MEC node must communicate it to the RSU, which is the one equipped with the required communication hardware able to communicate it to the incoming connected vehicles. Finally, as explicit notification, a road user may spot a hazardous situation on its own. Thus, he may decide to signal it through the dedicated citizen app, collecting all manually signaled hazardous situations in the cloud node. There, an automatic or manual event validation will decide if the hazardous notification must be sent to the vehicles. If so, the notification will follow the same path as the one sent by the automatic hazardous notification system.