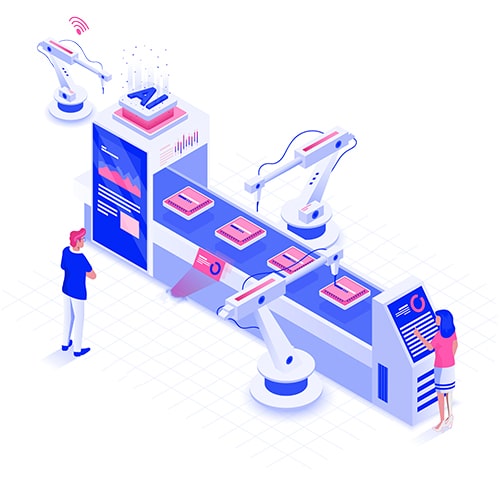 Reliable indoor positioning enables several innovative location-based services, because such accuracy levels essentially allow for real-time interaction between humans and cyber-physical systems. For safety-critical industrial IoT, real-time indoor localization services that monitor the movement of objects and detect human worker’s position with respect to the machinery (e.g., heavy-payloads robots), to prevent collisions and accidents. Specifically, the production process demands the involvement of humans and robots to assemble heavy and complex entities like car engines or power supply units, with robots assisting on carrying these heavy products for assembly.

The demonstrator (a typical human robot collaborative setup in a shop floor) is represented in Figure 1 with the following installation and entities:

The data obtained from localization sensing are often noisy and are affected by environment factors such as interference, multi-path fading etc. To obtain best estimate of measurement probabilistic algorithms are used such as Robust Adaptive Linear Quadratic estimator, Multi-model adaptive Kalman filters etc. Adding to this, using probabilistic algorithm it is also feasible to predict future motion trajectories time ahead with certain confidence in each region. These algorithms are computationally intense and are required to run in hard-real time constraints. Thus, the need to run these algorithms on powerful multi core processors.

Robot Motion Tracking service (RMT)
This service tracks robot arm movement and also provide future motion path at every joints. One instance of this service is assigned to exactly one Robot in the work-place area.
The service provides the following:

As the Industrial PC provides instantaneous joint angles of robot arm. This service performs Forward Kinematics operations to extract 3D coordinate position of end effector. Since the Robot motion planning unit knows ahead of time about future motion attributes (like joint angles) of robot. These attributes are obtained to predict future coordinates/regions of presence.

Collision Prediction and Avoidance service (CPA)
This service combines the information from PLMC services and RMT services. And uses probabilistic algorithm to predict the probability of collision between a given personnel and robot in a work-place area time ahead. If possibility of collision is detected, based on likelihood, safety distance and velocities of approaching Personnel and Robot, CPA service either slows down the robot or stops the Robot by sending appropriate control signal to PLC via IPC. One instance of CPA service is assigned to a group of Robots and personnel(s) in a work-place area.
This service provides the following: