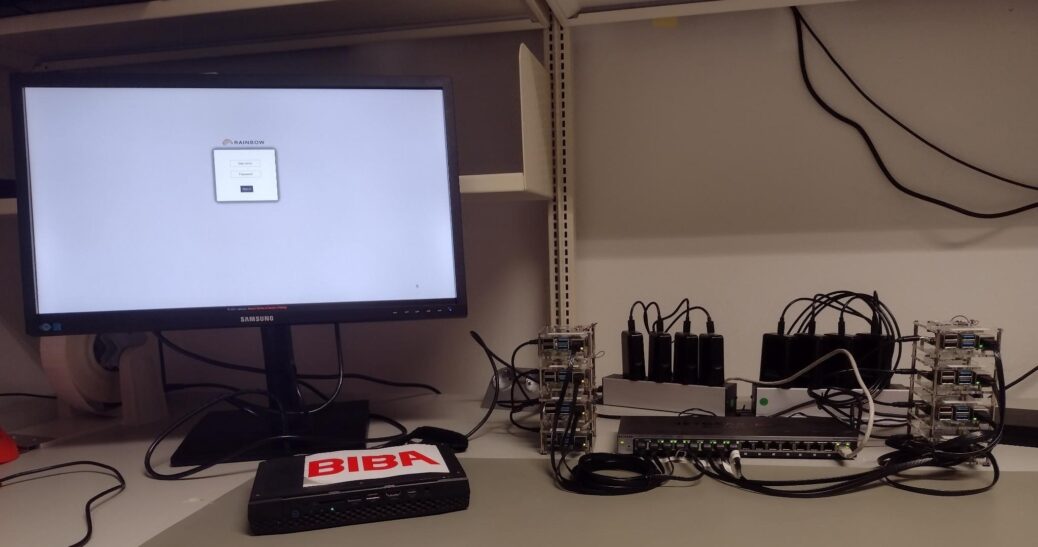 A Human-Robot Collaboration System relies on Edge / Fog Computing paradigm in order to achieve a safer, more collaborative environment in industries where humans and heavy-duty industrial grade robots can work in unison. In order to make such industrial workspaces safer and reliable, it is crucial to utilize the data generated from the robotic arms as well as an indoor-localization system in order to test collision avoidance and prediction algorithms in a reliable manner. Although the data from the robotic-arms and localization system may remain unchanged, the inherent logic of the algorithm needs to be initially tested in a virtual environment in order to avoid any unnecessary mishaps (collisions between humans and robots).

In order to tackle the aforementioned challenge, the team members at BIBA – Bremer Institut für Produktion und Logistik GmbH, have developed a Virtual Demonstrator, which simulates an industrial workspace with basic robotic-arms and personnel motion modelling a human walking pattern. These models will generate data, albeit simulated data, to be consumed by the Collision Prediction and Avoidance Algorithm. Additionally, the RAINBOW Platform will provide a deeper insight into how the algorithm can be scaled and address other crucial KPIs (Key Performance Indicators) for the use-case. Scalability through the First Release will also provide a concrete understanding of how the algorithm will behave in a simulated environment when more robotic-arms or humans enter the collaborative workspace in order to test different functionalities of the use-case.

The Virtual Demonstrator for the use-case will be tested on a testbed comprising of the following:

The Raspberry Pi Cluster will execute the necessary microservices in order to capture the generated data as well as the Prediction algorithm from the Intel NUC that runs the Virtual Demonstrator (data generators for robotic-arm data and personnel localization data). The RAINBOW Platform components are installed on the On-Premise Servers as well as the cluster and the user is able to access the platform via the RAINBOW UI. A network architecture diagram of the current setup is illustrated as follows:

Any cookies that may not be particularly necessary for the website to function and is used specifically to collect user personal data via analytics, ads, other embedded contents are termed as non-necessary cookies. It is mandatory to procure user consent prior to running these cookies on your website.